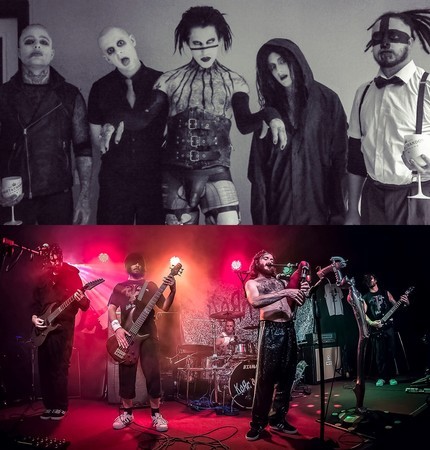 SPOUKY KIDS
The UK's only Marilyn Manson tribute
Playing all the greatest hits of the Antichrist Superstar and boasting a fully replicated stage production so authentic it's not to be missed by any Manson fan
A quote from Rob Holliday, Ex Marilyn Manson guitarist and frontman of Sulpher after he saw the show.
"Spouky Kids the UK tribute to Marilyn Manson are SUPERB! With a Fantastic front man ....this is by far as close to the real thing that's out there"
KORN AGAIN
Korn Again are a Korn tribute band from the UK endorsed by the original band. After forming in 2010, Korn Again have wasted no time in cementing their claim as the world's premier Korn tribute act, and have managed to replicate the band's trademark raw and aggressive sound, effortlessly translating it to the live arena through countless high-octane live performances.
Korn Again also have the stamp of approval from the original band themselves, as they were joined on stage by Korn's bassist 'Fieldy' and drummer Ray Luzier during a show in December 2016 to perform two of their biggest known hits - 'Here To Stay' and 'Freak on a Leash'. News of this spread fast in the rock/metal press after Korn posted an official video of the gig on the bands Facebook page. https://www.facebook.com/korn/videos/10154688510150761/