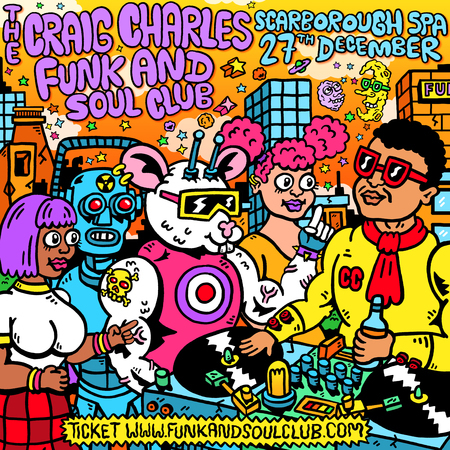 CRAIG CHARLES:
No need for introductions unless you've been living on a funkless moon for the last 10 years. He is the man-king of funk and soul, a pioneering force on the scene, the essential ingredients to the Craig Charles Funk and Soul Club.

SIR FUNK:
Sir Funk aka Simon Melhuish is head honcho at the legendary Funk and Soul Club and has played in some of the funkiest venues across Europe and further afield. If you are lucky enough to catch one of his sets, you can expect a strong dose of Funk, a wicked spoonful of Soul, all nicely topped off with a good measure of Disco. Very Nice.

KISTA:
Is a self confessed Vinyl junkie is also the man behind the independent Hip Hop label Soundweight Records who have put out releases including Jorun Bombay,Dj Format, Andy Cooper Whitefield Brothers and many more, he has also released a flurry of his own releases including the underground classic "Collecting Dust" with Glad2mecha, he has also worked with the likes of Cappo,El Da Sensei of The Artifacts and Maspyke to name a few, he is also a big player on the graffiti scene and has painted numerous places over Europe..